I am a Japanese man, living in Madrid, Spain. This Autumn, I had an opportunity to visit Tokyo. The seasonal flowers were blooming and they were sharing their great aroma with all parts of the nation’s capital. It was great environment to walk under excellent weather. I walked about 15 km everyday and could see the city inside out. The most impressive part I witnessed is that Tokyo became a truly international city; a number of foreign visitors are walking, not only tourist but also people working in Japan. At hotels and stores, receptionists were speaking English very well to serve customers. They used to be in panic when they had to help non-Japanese speaking customers but it is a completely different story now.

In addition to the people, a lot of foreign franchise businesses had been seen in the largest city in the world. Starbucks is having wonderful business there. The stores are packed everywhere. Especially, Starbucks Reserve Roastery Tokyo was an amazing place. This upgraded version of Starbucks exists only in Seattle, New York, Milan, Shanghai and Tokyo. The Tokyo store is the biggest among 5 stores (32,000 square feet) and has 4 floors. They roast coffee bean at the site, distributing great coffee aroma in the 1st floor with the coffee bar. This floor even has a bakery carrying products could go with coffee. 2nd floor is for TEAVANA, Starbucks’ tea brand. The tea bar was very sophisticated. The 3rd floor has a bar so that people can enjoy cocktails! A coffee bean packing machine and patio were at the 4th floor. I had their special filtered coffee and salami sandwiches with focaccia. The sandwiches were one of the best I ever had! Even for a person living in South Europe! No wonder that Starbucks boast over 1,400 stores in Japan. Starbucks used to have a partner in Japan. However, Starbucks HQ purchased their business in 2014 because their business was more than excellent. At that time, the sales were approximately $1,200 million and had approximately 1,000 stores. Other than the American coffee chain, I saw a lot of Taiwanese bubble tea stores such as Goncha, gourmet hamburger restaurants such as Shake Shack and European bakeries such as Paul. Clearly the foreign brands are establishing great names in Japan. 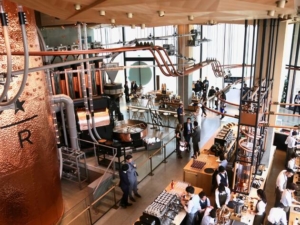 On the other hand, Japanese cultures are booming outside Japan. Especially the foods are being a standard chaice. Ippudo, a ramen restaurant franchise, is creating ramen boom in the world, opening the stores in all over Asia, the US and Europe. Coco Ichibanya is spreading Japanese style curry in the world and they will open even in India shortly. In the world of sweets, Beard Papa’s cream puff stores boast more than 200 stores outside Japan and Bake, a cheese tart store, is also opening the stores in many countries. It is not rare anymore that Japanese stores are having long queues. An interesting point is cream puff and tart are not originally from Japan. They enhanced products with their unique touches, as they did for electronics and cars. Other than foods, in the world of fast fashion, Uniqlo has about 1,400 stores outside Japan. In education, Kumon has more than 4 million students in 55 countries in addition to 1.6 million students in Japan. Needless to mention animations and games.

Japanese economy is 3rd largest in the world and the population is over 126 million. Tokyo, 13 million+ population, is the biggest city in the world. Franchise businesses are very active in Japan; 1,300+ franchise businesses have 260,000+ stores. Japanese service level higher than any other countries. In terms of services, they would improve the franchise systems. If you visit McDonald’s or Starbucks in Japan, you would know what I mean here. You would learn a different point of view through having Japanese franchise business in your country. Expecting Tokyo Olympics in 2020, Japan is international more than ever. It is time to have your brand in Japan and have a Japanese brand in your country.

Franchising in the United Kingdom
Scroll to top